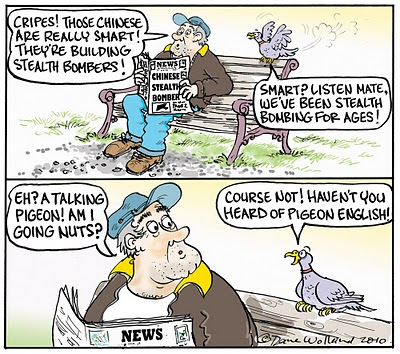 Native pigeons in New Zealand might be very beautiful, but they are not the smartest of birds. Unfortunately, their city slicker cousins are not much brighter. They got into the news recently when it was discovered that 10,000 of them had joined the Chinese Army.

A Chinese military spokesman has been reported to say that messenger pigeons are being used as a backup if electronic communications break down. This explanation sounds plausible enough, however are there possibly other uses for these pigeons that we do not know about?

For quite some time now, there has been much speculation about the development of a Chinese Stealth Bomber. It has been commonly thought that it will resemble the American versions that look like giant Manta Rays. Stealth Bombers are designed to sneak into enemy territory (by evading radar detection) and then make a surprise attack.

There have been pictures of various prototypes of Chinese Stealth Bombers appearing in the media, but so far there has been no reliable confirmations of one flying. What we do know for sure is that the Chinese Army has 10,000 pigeons being trained.

The Chinese Army also has access to the latest advances in Nano Technology. It is now feasible to make very tiny machines to interact with (and potentially control), any part of the body. It is quite possible therefore, that giant aircraft are only red herrings and the real Stealth Bombers are in fact electronically controlled pigeons.

If indeed Chinese scientists are using pigeons in this way, then they have certainly chosen the right bird for the job. Pigeons can be trained to reliably return home from over 700 kilometers away and twice that distance has been shown to be possible. It is thought that pigeons use the Earth’s magnetic fields to guide them over long distance and then with their excellent eyesight, they use landmarks for the last 80 kilometers.

Visiting a city park might never be the same again. Some of the innocent looking pigeons, that jostle to get your food scraps, might in fact be stealth bombers in disguise. All it would take would be a button to be pushed in Beijing and it will be all on. Forget about conventional warfare, pigeons would be able to disrupt a nation’s military capacity behind the lines in devastating ways.

How on earth could you stop explosive pigeons terrifying the civilian population and then attempt to shoot down thousands of controlled pigeons that carry nano nuclear bombs?

You might of course prefer to accept Chinese assurances that their weapons and huge army, are kept purely for defensive purposes. It is true, that apart from invading Tibet, the Chinese Army has been content to keep the Chinese Government in power at home.

Even so, the Chinese Government would be wise to keep sharp eye on the personal in the pigeon brigade. It might very well attract the wrong sort of people who would like to carry out a “Cooo d’état” and threaten World peace.
Posted by Dave Wolland at 1:40 AM

1- do not offend birds. they are more clever than (obama and the chinese guy and john key) together

2- read www.V2019.org watch my videos to understand what is going on.

very soon you will see our actions.