Scotch On The Rocks 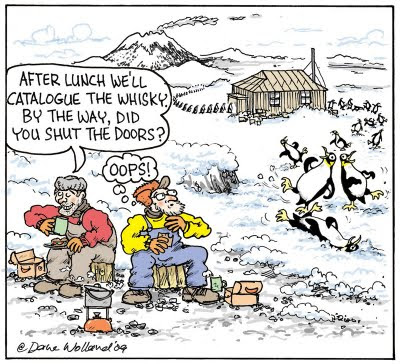 Scotch On The Rocks

“When you reach my age my boy, I think you will find that you will enjoy eating raw oysters, join the Lodge and even get to like the taste of the finest whisky.” I looked up at my father and wondered what the heck he was on about. After giving it some thought, I decided that it must have something to do with the amber coloured stuff that he was sipping from a cut crystal glass.

“Enjoy raw oysters!” he must have been pulling my leg. No way was I going to let something, that resembled the insides of a squashed hedgehog, go down my throat. As for joining a lodge, well I could see no attraction there either. Who in their right mind would want to dress up like a penguin in a tuxedo and recite mysterious texts wearing an apron covered with gold embroidery?

Of course, in time, things change and some of his prophecies have come true. I am sure he would be pleased to see that I do indeed now enjoy raw oysters dipped in vinegar. But I would think he would be sad to see my lack of interest in Freemasonry. I suspect tho’ that he might put his disappointment aside over a wee dram or two of whiskey, if our conversation shifted into the lofty realms of politics and ideas.

I bet he would have been as intrigued as I was when I heard that a team of Kiwis are heading down soon to the Antarctic to unearth a box full of Shackleton’s whisky. Shackleton must have left it behind after an abandoned attempt in 1909 to be first to reach the South Pole. It was buried beneath a building (which is still there today) and has remained stuck the permafrost ever since.

Whisky connoisseurs all over the world have shown a lot of interest in the expedition, especially the present owners of the McKinlay brand that made the whisky. They might even be able to extract some and perhaps recreate a kind of ‘Polar Explorers Brew’. It is likely to be peaty in flavour (a style trend at that time) and hopefully the bottles were stored standing up, which would minimise any cork damage that might allow air to leak in to spoil the treasure.

The descendents of Scottish emigrants to New Zealand are the second largest cultural/ethnic group here and they have had a huge impact on our culture. Curiously enough, many of their hardy Scots ancestors showed a strong preference for plain living and religious Puritanism and wanted to see the end of whisky as a legal beverage. In 1919, a referendum almost banned the consumption of alcohol, but returning troops only just tipped the balance the other way.

It all seems very strange now, however I have seen alcoholism destroy lives and I can see why the prim and proper wowsers wanted to take the dreaded alcohol away from us all. Like many other tempting drugs, whisky can mask underlying social ills and personal problems. The poet Robbie Burns certainly did not help matters when he wrote this poem in 1785.

Gie him strong drink until he wink, that’s sinking in despair;
An' liquor guid to fire his bluid, that’s prest wi' grief and care:
There let him bouse, an' deep carouse, wi' bumpers flowing o'er,
Till he forgets his loves or debts, an' minds his griefs no more.

These days we have other methods and medications that help us cope with sadness. So let them deal with that and allow us the pleasure of sharing good company with a drop or two of Caledonia’s gift of liquid amber. Robbie Burns was fond of whisky and it certainly did not stop him writing his amazing poems and songs. He was against pointless suffering and injustice and also opened our eyes to appreciate the natural beauty and the joys of life.
Posted by Dave Wolland at 1:29 PM