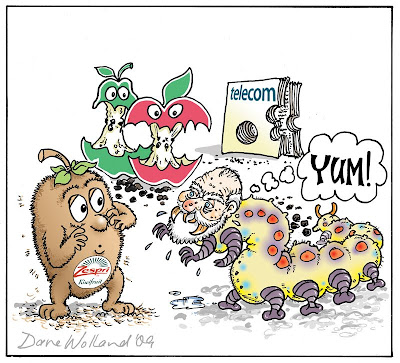 One of the pleasures that come with the start of summer is the arrival of new seasons fruit. After months of controlled atmosphere apples and kiwi fruit, it is such a relief to see fresh strawberries, peaches and plums available again.

In winter and spring fruit prices usually rise along with tomatoes, but over the last few years I have been pleased to see apples and pears remain at affordable prices. Sadly, I heard in the news that apple and pear orchardists have been suffering to make this possible. Some of them are pulling up their trees because of very low returns in comparison with other land uses.

One of the major complaints seems to be the loss of ENZA as a co-operative with single desk overseas marketing powers. Today, there are many exporters who compete to get overseas customers and this has apparently made them price takers instead of price makers. As a result, apple and pear growers are expected to cope with second and third world incomes.

A similar situation now seems to exist in the meat and wool sector after the disbanding of the Wool Board. On the other hand, Fonterra (dairy products) and Zespri (Kiwi fruit) appear to have done much better. I suspect that this is due to the unified grower support that helped them to successfully fend off the packs of asset stripping monetarists that were let loose the 1980s.

Ever since then, I have noticed the name of Tony Gibbs frequently appearing in the headlines as he accumulated a fortune as an entrepreneur. Lately, his connection to Turners and Growers has led him to take on Zespri after successfully supporting the privatising of ENZA.

So far, over eighty percent of Zespri’s share holding growers have stood firmly against changes - with many stating their fear of sharing the same fate as apple growers. Our Government has noted that support and also rejected any changes, but Tony Gibbs is not a man to give in easily. It looks as tho’ he ‘got the pip’ and is now off to the Courts to force a legal settlement.

Kiwi fruit growers have every reason to be concerned and I hope the Government will maintain its power to over rule the courts if a decision goes against Zespri remaining a co-operative with sole exporting rights. I have yet to be convinced that monetarist theories of wealth producing “Free Markets” (whatever that means) without regulation actually work in practice.

You can see this sort of thing in nature as well. If we did not have national parks and wildlife sanctuaries then most of our unique native birds and trees would soon become extinct. I would be surprised if many tourists would come here just to see the same sparrows and pine trees that they have back home.

Perhaps Mr. Gibbs does not fancy sharing his home patch at Matakana with the Kakas and Bellbirds that are spreading out from Tiritiri Matangi and Little Barrier island reserves. If I was in his shoes I would be delighted to lose a few mandarins that way.

Until the day when Fair and Free Trade is agreed on by all the great economic powers in the world, I think co-operatives like Fonterra and Zespri should continue to get Government support. Why mess with organizations that work well for their members and produce overseas funds that enable us to maintain our standard of living? If it means paying a bit more to keep them going, then so be it.
Posted by Dave Wolland at 5:04 PM