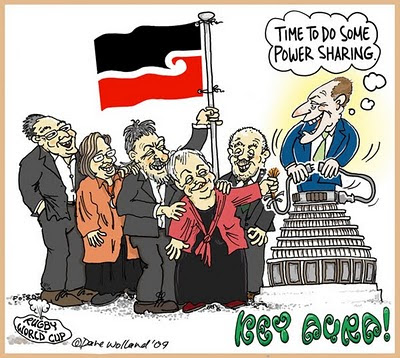 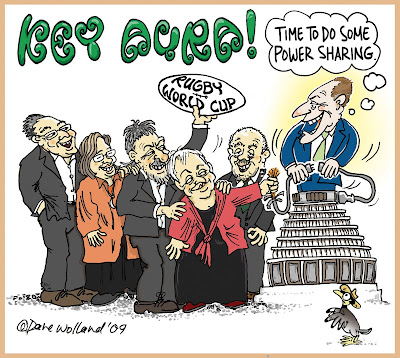 He’s done it again! As we watched the unseemly ministerial squabble in the Beehive over who would get to bid for the New Zealand rights to televise Rugby World Cup – in rode sheriff John Key. In no time at all, they were back into the Heavenly Choir of Coalition Compromise singing something like the same song.

No wonder his poll ratings are soaring to record highs. TV3’s Reid Research Poll has John Key at 55.8% in the Preferred Prime Minister stakes and opposition leader Phil Goff at 4.7%. However, Key’s decisive interventions in this affair and the Super City wrangle, raises questions in my mind why he allows cabinet ministers to make independent stands on issues without consulting one another. This is so very different from Helen Clark’s style. She had staff (like Heather Simpson) skilfully sorting out coalition compromises well before Government decisions were made. After nine years, she became so adept at it, that she gave me the impression of being almost a power freak who was in total control.

The last election proved we wanted something different and we certainly have got it. MMP means we can watch Parliament as a new kind of reality TV. For me at least, it is just as entertaining as a footy match. I watched Pita Sharples pull off a masterful interception and was heading for a certain World Cup try between the posts, when Murray McCully and Jonathon Coleman came in on the blind side and caught him right on the score line.

Alas, a video replay was called for and the try was disallowed. A disgruntled Pita Sharples cried foul and said the game was rigged. The ref threatened him with suspension for the rest of the season and Pita cooled off and said something like, “Hei aha, that’s MMP politics, you win some and you lose some. The seabed and foreshore game is the biggy, so let’s not let this get in our way.”

It appears the Government is going to ask voters at the next election whether we want MMP to continue or opt for another voting system. This is probably driven by hardcore conservatives and an influential elite who want to ditch MMP in favour of First Past the Post (FPP) or something similar.

I suspect that the public spats between coalition parties will provide more fuel to their argument that MMP is destabilising. I disagree with this point of view because I have been on too many committees to believe that going back to the old system will change MP’s behaviour. Any group of Kiwis from diverse backgrounds are bound to indulge in some ‘argy bargy’ from time to time – it is how we are.

What MMP does for us is to bring out into the open the various factions seeking power and we all have seats in the font row to watch the action. We now have a more diverse bunch of MPs ruling over us and I would hate to see us return to FPP. In that system, a lot of power broking was being done behind closed doors by a small number of people imposing unpopular decisions. It also had more potential to allow an autocratic leader to get control.

John Key has proved himself to be a masterful reader of public mood so far and he comes across as a good humoured listener and decisive when the situation demands it. I think he epitomisers some of the best sides of our national character, but just how long he can maintain this halo of popularity remains to be seen.

If he steers us safely thru’ the repealing of the Sea Bed and Foreshore Act he will deserve a knighthood. We might even see attempts to phase out the commonly used Kiwi greeting of “Gidday Mate” and replace it with a glowing endorsement like “Key Aura Bro” instead.
Posted by Dave Wolland at 6:02 PM