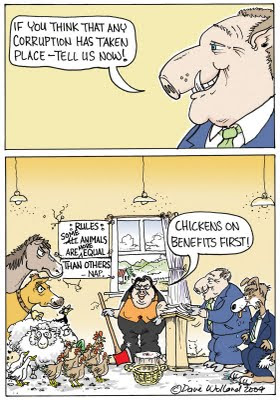 What is it about pigs lately? First it was ‘Swine Flu’ and then pigs in pens. Now politicians are being compared to pigs with their snouts in the trough, as their accommodation and travel allowances are exposed to public scrutiny.

I have often wondered why house speculation profits were not taxed like any other source of income. When I read about the goings on in Parliament over the accommodation perks, the missing part of the taxation jigsaw fell neatly into place. Many politicians own more than one house and some are doing ‘very nicely thank you’ out of real estate speculation and renting their surplus houses back to the State and collecting several parliamentary allowances.

Some might say that comparing politicians with pigs is an insult to an animal that is as noble as any other. The pictures I have seen of pigs in the wild show them as naturally clean and not much sign of the vices that we normally associate with their kind.

Obviously, pigs in captivity are a different matter altogether as they modify their behaviour in confined living conditions. This can result in two victims. Unhappy dysfunctional pigs and consumers who unknowingly eat their meat, which some chefs and nutrition experts say is very unhealthy to eat.

Perhaps we are doing the same to the politicians by penning them into parliament and in that situation we should not be too surprised to find that they take full advantage of having access to the pubic purse. No wonder the newspapers are running headlines of suspected abuse.

Pigs are more than intelligent than is commonly thought and a pig farmer told me that they responded to human conversation and also used their own language of at least twenty-six different sounds. This was brought home to me when a neighbour once invited me in for a cup of tea. While she was busy in the kitchen I saw a pig trotting into the living room. It grunted as it passed and made itself quite at home by stretching out on the carpet by the ranch-slider, to enjoy the winter sun.

I turned to my host and said, “Ahhhh…. Sylvia there’s pig in you house. Would you like me to give you a hand to get rid of it and help you get it back into the pen. “Oh, no need for that.” She replied, “It’s just George and he often wanders in and out.”

She could see that I was not totally convinced and so she continued, “He’s a Kunekune pig Dave and he knows not to make a mess in the house.” George looked at me from under his tufty eyebrows and appeared to grin and jiggle his tassels.

He has inspired me to make a brilliant suggestion to help solve the problem of some politicians misbehaving like perky pigs. Before we tick their boxes every three years, perhaps like Kunekunes, we should be shown some definite and reassuring evidence that they are house trained before they enter Parliament.
Posted by Dave Wolland at 3:13 AM