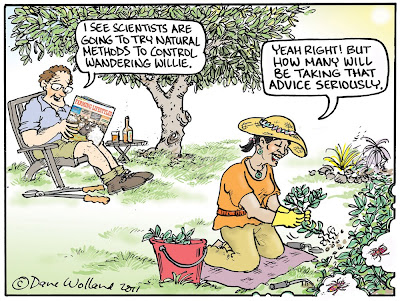 Overseas visitors to New Zealand often tell me that they are amazed to see animals and vegetation from their own country growing so much better here. This gives us an economic advantage when they are useful, but on the other side of the coin is the huge cost controlling weeds and pests.

Alas, many of us have made it worse by allowing weeds to escape from our gardens. These invaders are giving farmers and the Department of Conservation plenty of financial head aches as they struggle to remove them. In many cases the horse has bolted and keeping weed numbers down is the best we can do.

A recent example is the introduction of beetles from South East Brazil to control Wandering Willie (or as some know it, Wandering Jew or Tradescantia). This plant has for a long time been a widespread nuisance in the garden and many dogs get an allergic reaction by touching it.

Now it is becoming a really dangerous threat to native bush by smothering the forest floor and preventing the growth of regenerating native vegetation. As part a jointly funded project, Landcare and the Auckland Council have now released the first beetles at Mount Smart Domain on the 25th of March this year. It is hoped these beetles will chomp their way into infestations of Wandering Willie and reduce its rampant growth. Other species of beetle are also being prepared for release in the near future to knock the weed back even further.

Over 30,000 new varieties of plants have been brought into New Zealand and more arrive every year. Most of these are beneficial or at least non intrusive. However, our wonderfully mild climate and relatively few insect pests seem to be an open invitation for some plants to conquer the landscape.

The effect of global warming is another factor and Christine Shepherd, from Auckland University, is completing her PhD. by investigating how this is affecting the spread of several species - such as Bungalow Palms and guavas. Bungalow and Phoenix palms are easily out competing their native cousins the Nikau Palms and endangering its presence in our bush.

These new palms grow much faster and produce a lot more seeds than Nikaus. At present, they are not very noticeable but in 30 years time they could be a common sight in our bush. They take around 7 years to mature and birds disperse them over wide areas. Both palms are admired for their beauty but some tough decisions might have to be made if we want our bush to be free of the dangerous spines of the Phoenix Palm and Nikau endangering Bungalow palm.

Insects that eat the weed palms and not Nikaus could be hard to find because they are all closely related. The most helpful things we can all do would be to stop planting exotic palms and remove the ones already here – or at least remove all the flowers on valued palms each year.
Posted by Dave Wolland at 2:48 PM