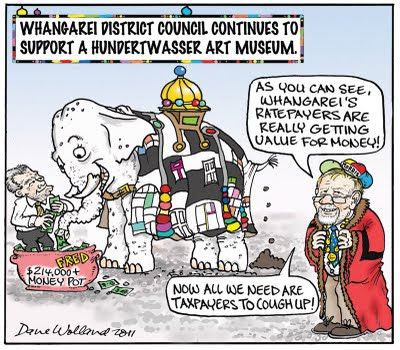 Click Cartoon For A Better Picture
It looks as tho' the Whangarei District Council is going to fund a very controversial Hundertwasser styled gallery at the Town Basin area costing around 12 to 13 million dollars. As much as I like Hundertwassers work, this gallery is a fake one based on a sketch which showed very few details. The new gallery will not earn its keep I suspect and reminds me very much of the Cargo Cult in the Pacific, where Islanders built airports with wooden planes on them to attract the magic aircraft they had seen land during WW2.
Posted by Dave Wolland at 2:30 AM