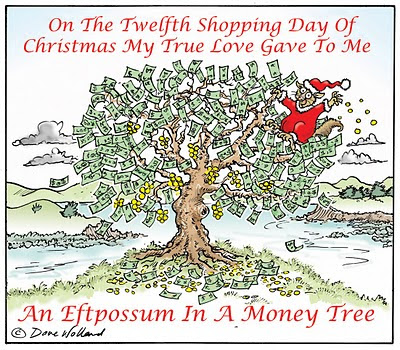 Click Cartoon For A Better Image
Looking back, I can see that the newspapers and TV gave us plenty to worry and complain about this year. Most of us probably had to deal with personal stuff as well and look forward to putting it all behind us. Even so, we still have a lot more to be thankful for. As Fred Dagg famously put it, “You don’t know how lucky you are mate”.

It is therefore worth reminding ourselves occasionally that we live in one of the most beautiful areas in New Zealand. We now have wonderful summer weather inviting us to go swimming, fishing and tramping in our spare time - or just finding a quiet shady spot to read a book. We could certainly do with some rain for the farmers, but my grape vines are carrying the heaviest crop ever and there are already early plums, apricots and peaches in the shops and farmers markets.

For many people the Christmas/New Year break is something to look forward to. Sadly, for some that is not the case and access to extra alcohol can dangerously release deep seated frustrations and disenchantment. However, it is amazing how quickly these feelings can be reduced by friends and family. We can all take extra steps to remind one another how much we care. If we act by sharing our advantages and create opportunities, we can make a real difference to troubled lives by actions instead of pious comments.

When it became clear that twenty-nine miners had perished in the Pike River Coal mine, I was impressed with the short public announcement by our Prime Minister. John Key’s face genuinely expressed the sorrow most of us felt. He reminded us that “In New Zealand, we are our brother’s keeper” and his government would be doing everything it could to ease the hardship of the dead miner’s families.

I am proud to live in a place that has such values and I hope we never lose that commitment which John Key obviously believes in. I think that an uncaring and less equal society is bad for everyone – both rich and poor. I have just finished reading a book (from the Kaipara District Library in Dargaville) titled “The Spirit Level” and although it did not tell me much that I did not know, it provided clear statistical evidence to show the undesirable consequences of economic and social inequality.

Its authors, Richard Wilkinson and Kate Pickett, show quite clearly that less equal countries such as the USA are not doing so well as more equal societies as Japan and Scandinavia. Unfortunately, New Zealand (along with Australia and Britain) has followed blindly after the USA over the last thirty years and we are now paying the cost.

A new idea comes to mind as I write this article. How about continuing some of the best things about Christmas into next year by creating opportunities and improving our relationships with other people. Strangely enough, we will probably do ourselves a favour as well.
Posted by Dave Wolland at 11:09 PM