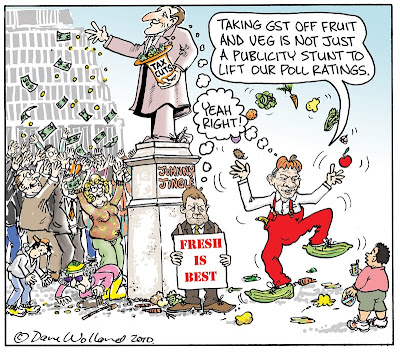 Now that GST has risen to 15%, low income New Zealanders are probably going to face another drop in their standard of living. National’s tax reductions will soften the impact, but most of the economic data that I seen clearly shows that the GST increase will widen the gap between rich and poor.

I have heard comments that the GST increases and income tax reductions will encourage savings. However, many beneficiaries and low income earners have to spend most of their money and so it obviously cannot apply to them. High and middle income earners on the other hand will be able to, but will they? Shares and finance companies have not been doing too well and my expectation is that they will invest in housing (which is GST exempt) and trusts that minimize tax liability.

Both our major political parties are committed to GST. Labour’s Roger Douglas began the tax with a 10% rate in 1986 and I think Labour also raised it to 12.25 % in 1990. Recently however, they have been responding to complaints about how GST affects families and the nation’s eating habits. They have now floated a policy of removing GST from fresh food.

People who criticize this proposal say it will require and army of civil servants to police. To see if this is true, we need look no further than across the Tasman Sea. The Australians also have GST (10%), but they have no GST on basic foods. Rather surprisingly, compliance has not been expensive or difficult to administer. They tackled the supply chain at source and retailers have adjusted well.

Fresh food! Now that phrase has a certain ring to it. I can see someone like free range cook Annabel Langbein on TV telling us how wonderful Phil Goff is as she dices tomatoes and squashes cloves of garlic. It would also do a lot to help me overcome my own thoughts of Phil when I marinate a headless chicken that is destined to stew in its own juices in one of my terracotta clay pots.

Labour’s finance spokesman, David Cunliffe, has indicated on TV1’s Q&A that the cost of exempting fresh fruit and vegetables from GST will cost around $250 million and can be offset by taxes on less desirable products like tobacco. There might be even greater savings elsewhere as well because fresh food will very likely help keep us healthy longer and out of hospitals.

Labour’s new policy might also be one small step towards reducing the inequalities in New Zealand that Phil Goff helped create. Extreme inequality can be bad for the rich and poor and a book that explains how is the “The Spirit Level” by Richard Wilkinson and Kate Pickett.

Another plus will be the incentive to buy New Zealand produce and there are many areas near every city and town that are ideal for this. Even so, time will tell if it will appeal to voters or encourage them to give Labour an electoral slap in the face for getting fresh with our gullibility.
Posted by Dave Wolland at 3:59 PM