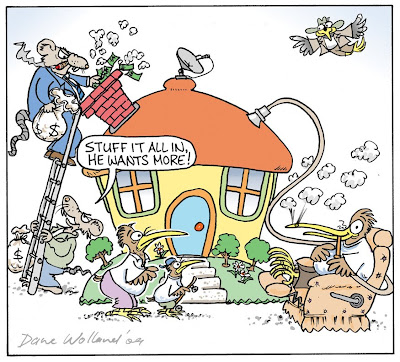 Rachael Carson has been quoted as saying, “Change is the only element of life which is constant.” How true that is, but there are times that I wish it did not move so quickly.

I was just getting used to the idea of a long drawn out recession when, ‘blow me down’, international trade has picked up and the banks are lending again. Dairy farmers are getting an increase in milk payouts too - even at a time when the New Zealand dollar has surged in value, making petrol and imported manufactured products more affordable.

Does that mean the recession is over and the warty ogre of depression has been sent to pack its bags? Will I need to stop dusting off books on self-sufficiency and gardening - like “Dig For Victory” that my father used in the last depression?

Some financial commentators are expressing caution and the Governor of the Reserve Bank, Allan Bollard, has voiced his concern about our love affair with houses as the best investment. He fears that an economic upturn will again suck in overseas capital to increase our unrealistic levels of debt and so begin the property boom and bust roller coaster all over again. Perhaps he was trying to influence a Government committee on tax reform that is working, somewhere deep in the Beehive, on sorting out how tax policies have allowed harmful distortions in our economy.

Thirty years ago, when I bought my first property, it took about three times the average wage to buy a house. Today, it takes six to seven times the average wage to do the same. This must put an incredible amount of strain on young families. If I was in their situation, I would feel quite resentful seeing so many affluent Baby Boomers renting out several houses to those who cannot afford to buy them. They also seem to pay very little tax on speculative gains while claiming expenses against their other incomes.

How this came to pass would take more room than this column allows, but suffice to say, the Government wants to change this situation where too much money is being stored in paper values instead of productive enterprises.

One method to change this is a capital gains tax. However, these words put a chill down the spines of most property owners and it would be a very brave government to attempt to bring it in and employ bureaucrats to enforce it. Much more likely would be incentives to invest elsewhere, or even some coercion to save more.

In Australia there is a compulsory superannuation scheme that has an age limit before you can access it or pay your house off with the accumulated funds. These funds are now huge and I think this is how they managed to cope with the current recession much better than most other countries. We benefited too, because many of our banks are Australian owned and were therefore protected from the worst effects of the international ‘credit crunch’.

Another complicating factor in high property prices is the fact that the human population in our world is expanding and there is only so much land to go around. Our present foreign investment and tax laws are attractive to land hungry investors and this puts further pressure on land prices.

A recent article that I read in the Economist magazine claims that some of the enormous trade surpluses being accumulated by Asian and oil rich Arab states are being used secure land in Africa to grow food for their investors. This sounds very laudable, but in some cases aid money from elsewhere is being spent feeding starving people who have to watch food grown in their area being exported.

Obviously, Government reforms will have to factor in the risk that the same could happen here if we undervalue our independence and opportunity to own our own piece of dirt.
Posted by Dave Wolland at 4:30 PM