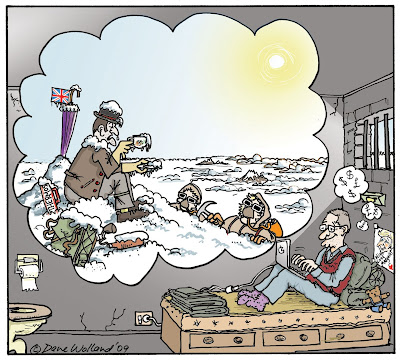 Two very different people found their way into the public spotlight recently when the question arose (once again) - who really got to the top of Mount Everest first?

The late Sir Edmund Hillary is still the top contender for most people. However, in England, there is a determined bunch of Poms who want to contest this and the latest leader of the pack is the notorious author/politician, Jeffrey Archer.

It appears to me that these celebrities fall into two camps. One has almost stumbled into public acclaim by pursuing his dreams and the other has sought the limelight by raking up a controversy.

Sir Edmund is arguably the most esteemed public figure in New Zealand’s history. He was an incredibly courageous achiever and a devoted family man who tragically lost his wife and daughter while helping the Sherpa people build schools and health clinics in the Himalayas. In New Zealand, we admired his modest and quietly determined character – a quality we Kiwis are often noted for.

Jeffrey Archer, on the other hand, has the reputation of being a discredited British Conservative politician who was jailed for two years on charges of perjury and obstructing the course of justice. When I saw his picture in the paper, unpleasant memories of the Thatcher era re-emerged and I was reminded of a very ruinous period in Britain’s social and industrial history. They are still paying the price and it is adding to cost of the current recession.

Archer’s other claim to fame is the ability to write a good yarn. Titles I can recall being very popular are, ‘Not a Penny More, Not a Penny Less’, ‘First Among Equals’ and ‘Cat O’Nine Tails’ (Illustrated by Ronald Searl). He used the proceeds to avoid bankruptcy and writing has pulled him out trouble ever since.

Even when he was in prison he continued to write best sellers (Three volumes of ‘A Prison Diary’) and carried out research for his latest novel, ‘Paths Of Glory’. This book was published in March this year and makes the case for the Englishman George Mallory successfully climbing Everest in 1924.
The reaction in New Zealand was almost universally acidic. Mountaineer Graeme Dingle responded with, "He's dreaming. There's essentially no chance Mallory got to the top. All the evidence points to them not making it."

In 1999 Mallory’s body was found only 200 meters from the his goal, but his climbing partner, Andrew Irvine, has yet to be found. Mallory made a promise to place his wife’s photo at the summit and it was not found on his clothing. This has led to speculation that he might in fact have succeeded and was making his way down.

A crucial part of the evidence could be in Irvine’s clothing or pack, because he was the one who carried the Kodak camera. Despite the time factor, it is thought that the film would survive. The search is continuing.

A film clip I saw of Mallory in his climbing gear astounded me. Compared to Hillary and Tenzing, he was very lightly equipped – even for that time. Like Scott’s tragic Antarctic expedition he obviously belonged to the stoic British tradition of toughing it out – Man against Nature. It is very possible that he chose martyrdom ahead of safety and decided to soldier on to the summit despite the cost.

I guess we will possibly never find out the truth, but nothing can ever take away Sherpa Tenzing’s and Sir Ed’s amazing achievement and returning to tell the tale for many, many years afterwards.

I would not be at all surprised if the Poms tell us next that Hillary found more at the top than just snow and ask… “What did he mean when he said, ‘We Knocked the bastard off!’ Was it just one of those uniquely raw colonial expressions of achievement, or was it perhaps a Freudian slip?”
Posted by Dave Wolland at 3:08 AM