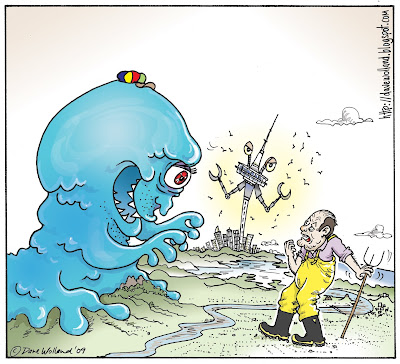 When I read that the various satellite cities and districts around Auckland were going to be herded into one Super Auckland City by the Government, I was very surprised to say the least. The Auckland area has, right from the very beginning, been an unruly congregation of competing voices and I did not think they would generally accept a centralised unity imposed upon them.

Mayor Banks obviously sees himself as the best contender to be Lord Mayor of a massively enlarged Auckland City. With his historical links to the National Party, he seems to think he has exclusive access to the ear of Government and dismisses any organized resistance to the current plan as the work of “Low flying seagulls” and ‘rain dancers”.

He will certainly keep the media busy as groups jostle for control of what will probably be the second most powerful political organization in the nation. Of particular interest to Kaipara folk is the fate of Wellsford, which has yet to be decided on.

Mark Farnsworth, chairman of the Northland Regional Council, has been quoted in the Northern Advocate saying, “The reality is that if Northland decided on the same model, we could do it tomorrow.” This sounds all very ominous to me and yet somewhat familiar.

I recall well the time I spent near Waipu before the Whangarei County Council amalgamated with Whangarei City. The County Council was very supportive when I applied for approval to set up a studio and I remember warmly the help I received from the local building inspector.

When I built my studio he called in and inspected the site and was a great help as he advised me all the way thru’ the design and construction stages. He also dropped in on his way to other jobs to check on problems while our house was being built. Without his help, we might well have ended up with a house full of the same problems suffered by the many “leaky homes” being built at that time.

Ten years later, I was doing some alterations and I was disappointed to hear that he had taken a job with the Kaipara District Council. So I went instead to another building inspector who used to work only in the city area.

I was confronted with a little man with a tight face who had quite a different attitude altogether. This building inspector was having a personal chat with a tradesman friend (who was not in the queue) and I suspect he was annoyed to be interrupted by a bearded hippie type like me. I asked for advice and got this reply.

“Now look here Sunny Jim, I’m not here to waste my time on stuff like that! Go find an engineer to draw it up, sign it off and I’ll look at the plan.” I then explained that I was going to do it myself. He got quite shirty and told me to clear off. As I left I turned and saw him laughing derisively with his mate as they watched me leave.

I was short off funds and really annoyed at having to pay a hefty fee for something I could do myself. Looking back, I think this episode nicely illustrates the difference between urban and rural ways of doing things.

In cities, people are more specialised and trade their skills at a premium. In the country, on the other hand, people need to be more self sufficient, multi-skilled and co-operate to cut costs.

If Mark Farnsworth is hinting that Northland should have one ‘monsterous’ Northland council to fend off the ‘aliens’ in the south - then I hope the Kaipara preserves its rural way of doing things if this idea becomes a reality. I believe we have something special here and we should be prepared to do what ever is necessary to preserve it.
Posted by Dave Wolland at 2:01 AM