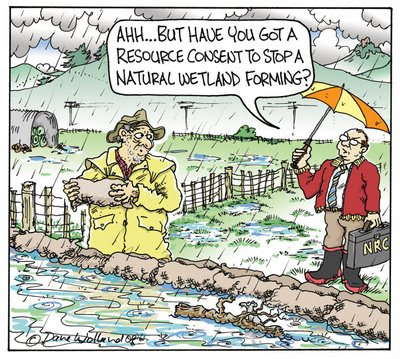 Country life is often served up in real estate advertisements as ‘a slice of heaven’. Emerald green pastures are shown under cloudless skies, with contented livestock grazing around houses that would not look out of place in any House and Garden magazine. It certainly is an appealing picture and each year sees a new batch of urban converts fleeing the rat race to seek a new life ‘out in the sticks’. One of them even got his story into the NZ Herald. He sold his BMW dealership and headed out far from the city lights to live the good life – with style.

He soon had a rude awakening however, when he found out that rural life did not quite match his dreams. At first it was the noise. Every morning cocks crowed, dogs barked and cows seemed to moo all the way from paddocks to the milking shed. To make matters worse, his neighbour used foul language when directing dogs around the farm and responded in much the same way when complaints were made about cows leaving a disgusting mess on the road. It accumulated like concrete under cars, especially shiny new beemers. Every car trip had to be carefully planned to allow time to wash the paintwork or drive out later when it had been scattered by other cars and dried out a bit.

The ex-car dealer was a man of action. Such insulting and bad behaviour would never be tolerated in suburbia. He thought it was time to bring more civilised ways into the countryside! He decided to take his neighbour to court and sue him for disturbing the peace and degrading the environment. The case was, unsurprisingly, thrown out of court by a judge who upheld the cocky’s right to carry out customary farm practices and exercise free speech on his own land.

The ruling would no doubt be music to the ears of most farmers who get peeved off by life stylers with urban expectations. Oddly enough, soon after I read the Herald article I came across a person who went even further and wanted all small landholders kept out of rural areas.
I was enjoying a beer at a sixtieth birthday celebration on a local farm, when I was introduced by my host to Ian Atfield, a well known Wellington based architect. His work was very familiar to me in the seventies, when his designs (and his own hand built house) were part of radical shift in architectural style.

District Planning and The Resource Management Act came into our conversation and Ian let fly with his own ideas. As he saw it, towns and cities should be fenced off and shifting to the countryside by life stylers prohibited. He envisaged townsfolk living in high-rise buildings and farmers and the Conservation Department left to get on with their work in rural areas.
I disagreed, arguing that New Zealand had a very small population and a lot of real estate – there was heaps of room for everybody to choose to do their own thing. Each time I fly over Northland (on a fine day) I am struck by how few trees and houses there are and so therefore, I see no need to be so restrictive.

One of the few positive things about petrol price rises will be the incentive to use the land more effectively, instead of commuting. I hope the number of stalls and the range of produce will increase at farmers markets, so I can avoid buying tired looking vegetables and fruit in the city supermarkets.

The way this wet winter has gone so far, I would not be at all surprised to see some enterprising life stylers setting up some rice paddies and running a few water buffalo. As the climate changes, so should we – hopefully without meddling bureaucrats telling us how to do it.
Posted by Dave Wolland at 2:49 PM

Big brother syndrome lives on sadly.
Interesting meeting someone as great as Atfield then he tuens out to be so hard line. I don't see that as constructive towards the work of keeping the balance in this world.