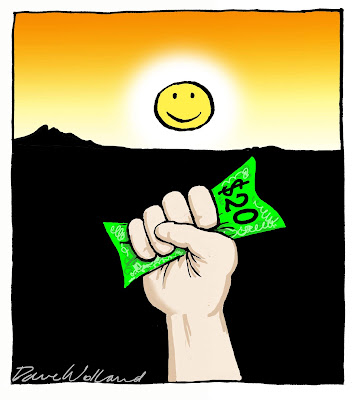 Today, October 22nd, is Labour Day in New Zealand. It once commemorated the creation of "The Forty Hour Week" and now looks sadly out of date in the current retro-liberal economic regimes that have been in force here since the 1980's. In most Western economies it is much the same and has seen the re-emergence of widening levels of inequality and lower living standards for many middle class and most lower skilled working people and beneficiaries. The minimum wage in NZ of $16.50 per hour might seem a lot to workers in less affluent countries, but in New Zealand we now have large numbers of working poor who struggle to survive on incomes comparatively very similar to those in the pre World War Two period of the Great Depression.

It is increasingly accepted in NZ that just over $20 per hour is the amount needed to be a "Living Wage". Many business people disagree and say it would hurt the economy as well as push them to ask for importing migrant workers instead of locals (eg. especially in NZ orchards and vineyards). Others say that it would turn them to look at automation and result in more unemployment. Both arguments do not appeal to me and in the latter option of automation I see real advantages. History tells us the technological advances of automation have in fact ultimately created more better paid jobs and a generally richer society, so I see little to fear there.

I grew up in a time of unprecedented economic growth and rising wages and working conditions during the 1950's and 1960's when NZ had one of the highest standards of living per head in the World. So what has changed to make us worse off now than many other countries? I blame our shift from Neo-Mercantilism to Retro-Liberalism. Retro-Liberalism is my term and used in place of of neo-liberalism - that pretends to be something new. It is not of course because it resurrects policies that I am sure made The Great Depression far worse and contributed to the disastrous Second World War. Neo-Mercantilism covers a mixed bag of policies where governments and local businesses (and unions) work together pragmatically to create trade surpluses that fuel economic growth. Whereas classical Mercantilist regimes often used armed force to establish colonies to supply raw materials for consumption and industrial production. Today, Neo-Mercantilist governments are also obliged to work within a sustainable, Earth friendly framework and actively ensure business does the same because they reserve the right to guide the economy in desirable directions.

I would like to see a return to the "Forty Hour Week" and time and a half wages after usual working hours - plus double time on Sundays to compensate for the loss of a day of rest. Saturday afternoons should be a time for recreation ( re-creation) and Sundays a period of spiritual and family time - as it once was when I was a youngster. Retro-liberal policies are a recipe for eventual social and then economic collapse and repeat the terrible mistakes of the past.

What do you think? Do you like what is happening to Western democracies - where people get angry and nitwits get into power and wreck the show for the rest of us. Surely there is a better way and Labour Day is a timely reminder that well supported unions pushing for better working conditions and a productive neo-mercantilist economy  are the best ways to go - as opposed to the blindfolded, consumer driven and financial and social deficit tolerating economy that we have today.
Posted by Dave Wolland at 4:34 PM

I like your argument Dave. Makes sense. There is enough to go around. Geoff F