Time's Up For Bill English 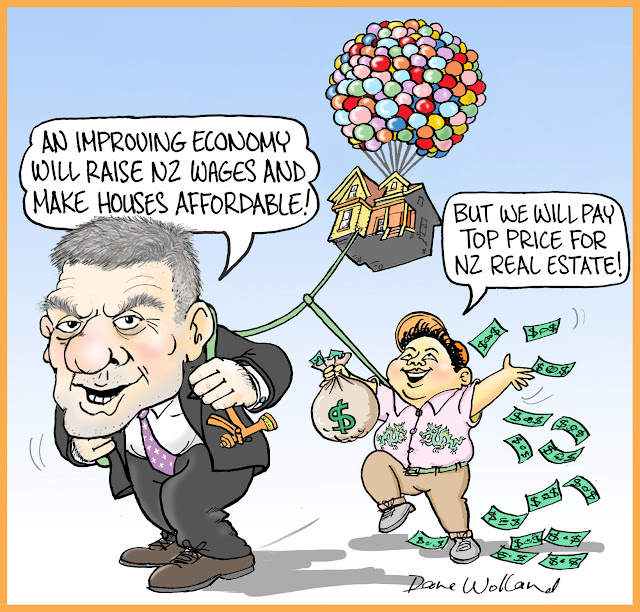 After New Zealand's Leader Of The Opposition and ex Prime Minister announced his resignation, there were many Kiwis who said they thought of him as compassionate, a financially prudent Minister of Finance, a good Christian principled family man and generally nice guy etc. However Bill English's track record suggests another way of thinking about this long serving National  Party politician.

Bill English has left behind a legacy of record levels of homelessness and inequality, a dangerously huge house price bubble (one of the World's highest), trade deficits, record numbers of immigrants from non traditional sources such as Asia (that is rapidly changing the demographic balance in NZ), a large increase in Government debt and reductions in government services such as health and broadcasting. In my opinion, New Zealanders have generally accepted such policies like the proverbial frog being slowly boiled to death while having every opportunity to opt out of that fate. John Key, a recent and very popular National Party Prime Minister, called it "incremental reform". I call it turning the clock back to pre World War policies that created the Great Depression.

I once asked my father what life was like during the Great Depression in the 1930's. His reply surprised me. "Well, I was lucky, I had a job (on reduced wages) and life went on as usual for a lot of people and actually the really well off enjoyed the drop in prices, especially luxuries and the lower cost of labour and services. The problem was that 25 to 30 percent of the population were cast into dire circumstances and sort of dropped out of the economy and I hardly saw them in the streets. Although the shops were full of things to buy they could not afford to buy them and so some became so desperate, the Government had to put armed guards at the rubbish tips to stop people going there to get food to eat and clothing to wear."

Today we are supposed to be much better off, but why are the charity food banks once again being overwhelmed by the need to help the rising numbers of poor people? I put the blame at the feet of "good old guy" politicians like Bill English. Thanks but no thanks Bill! You will not be missed by the many newly impoverished New Zealanders who cannot afford to buy a house, have to pay exorbitant rents and struggle to feed and clothe their families.
Posted by Dave Wolland at 6:45 PM