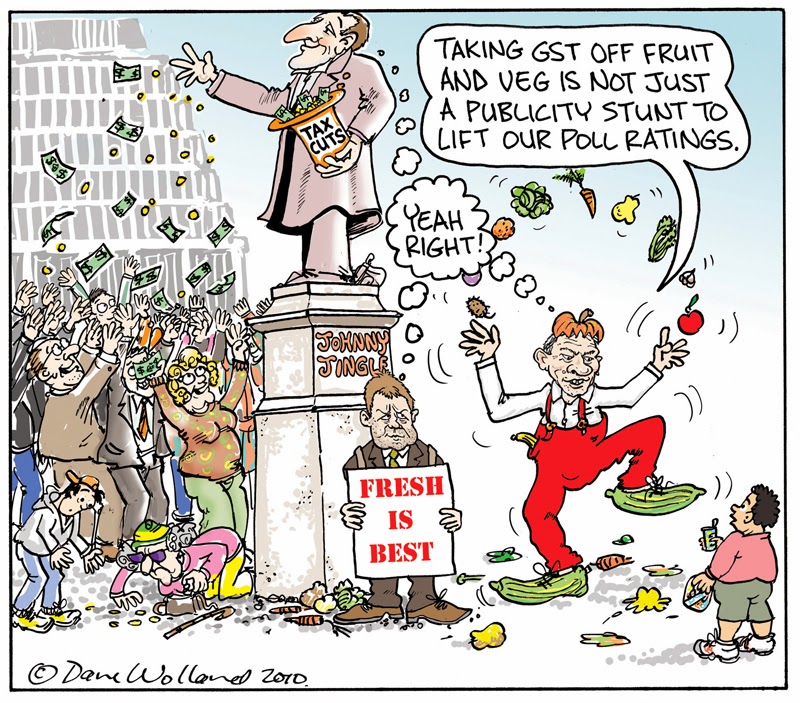 David Cunliffe is starting to get rid of the impractical parts of the old Labour policies that the public never really took a shine to. I did this cartoon in 2010 when Phil Goff (the Labour Party Leader at that time) battled on with a collection of misguided and stifled politicians pushing unattractive policies. I felt at the time that David Cunliffe was very uncomfortable with these, but he remained loyal - and yet his body language appeared to tell quite a different story. In the cartoon he is seen holding the billboard.

His State Of The Nation speech as the new Labour leader will be keenly anticipated by those who want attractive and needed changes in NZ. Ditching the policy of removing the Goods and Services Tax on fruit and vegetables will be a good start, because it would have been very difficult and expensive to impose and police. Next up is the proposed shifting of the retirement age to 67. This is an election plank disaster. There are much better ways to acknowledge the fact that Kiwis are living and working longer. The Government obviously needs to lower the increasing cost of paying  superannuation to people over 65 who also earn wages - some right into their eighties. However, there are also many who are exhausted by age 65 and deserve support after working at hard physical jobs most of their lives. Forming policies with the right balance and electoral appeal will be crucial to Labour's election chances.
Posted by Dave Wolland at 12:37 PM