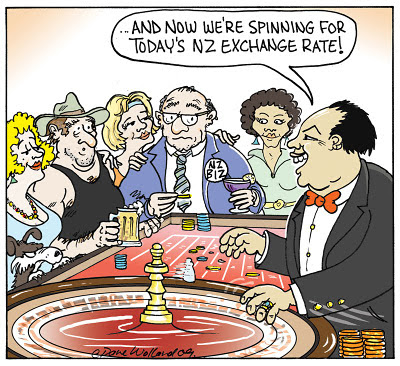 If you want to make things or grow produce commercially in NZ, one of the biggest difficulties you have to deal with is the way our government chooses to use a floating exchange rate to help regulate our economy. I wonder whose bright idea it was to use our unstable dollar in this way and deliver Kiwi business profitability into the hands of fund managers who handle the savings of Chinese banks, Japanese housewives and Belgian dentists etc.

To get a take on what is happening overseas, just imagine how you would have to cope if the NZ internal economy operated like the global economy - where districts (or provinces) had their own exchange rate that was changed daily by professional gamblers in the Sky City Casino. To further complicate matters, some districts would also set their exchange rates to ensure a continual economic advantage over other districts.

If you traveled around NZ, imagine how frustrating it would be trying to work out the going rates every day so you could control your spending and income expectations in localities only a few hours from your front door. I think it would be incredibly complicated, inefficient and unfair.

Obviously, in our domestic economy, we need a single exchange rate for commerce to run efficiently along with one main language, commercial and social laws etc. Perhaps there is a solution here to help the World's economic woes by eventually having one world currency and the same commercial standards. Fair trading agreements would also need to be negotiated to establish a real level playing field – in the same way The EEC takes in new members perhaps.

A logical place for us to start would be to get an exchange rate parity and a real free and fair trade deal with Australia; then (in steps), negotiate the same sort of arrangement with the U.S.A., Canada, Europe, Japan and the rest of the World. If a shared exchange rate value became established between countries, as it does within our domestic economy, then international trade would surely be fairer and give us a more accurate picture of the real cost of transport, raw materials, goods and services etc.

This concept might help stem the wealth transfer taking place from the West to Asia and allow wealth to be generated within each country influenced by its own natural advantages – instead of currency manipulation. It might also help environmentally by exposing the real cost of transport and energy.

Initially, in New Zealand the value of exports sent to traditional markets might fall. However quotas and tariffs would probably be less justifiable and should lead to greater market access. That would assist the potential to create improved economies of scale and so reduce costs. Spending power within New Zealand would probably increase as well and so many input costs would decline.

Relying on manipulated or floating exchange rates to determine business profitability has created serious trade imbalances between nations. In my opinion, it has also contributed to the debt crisis because nations were tempted to correct massive trade distortions by borrowing.

I heard President Obama on the radio saying that his government will strive to lift his country out of the recession by reforming the finance sector and promoting ‘Fair and Free Trade”. With our much smaller economy we could succeed years before he does and show the world that it can be done.
Posted by Dave Wolland at 12:44 PM