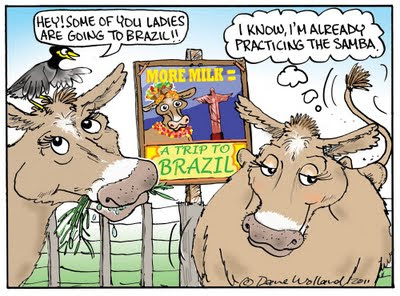 Click on cartoon for a bigger picture
During the last decade, many of the larger South American economies have been growing strongly. Banana Republics and Dictatorships transformed into progressive democracies and their people were rewarded with a rise in their living standard of living.

Fonterra has been cashing in on this change of fortune by investing in dairy processing enterprises there as well as supplying them with milk products from New Zealand. Their latest venture is in buying 850 hectares of farmland in the Brazilian province of Goias and setting up a New Zealand designed dairy farm.

It will supply a local processing company and milk around 3300 cows in two milking sheds. Fonterra obviously thinks that it better to join in with the opposition rather than competing with them head to head. It is very likely that some kiwi dairy farmers will be concerned about this – especially in light of the PPG Wrightson’s problems after investing in Uraguay farms.

This sort of investment is of course not new to Fonterra which these days provides 30 – 40% of the international tradable milk supply with diary products from New Zealand and other countries. Its options in New Zealand for expansion have been limited by Government regulations and the decreasing amount of suitable land for new diary farms. Therefore overseas investment has been seen to be a logical way to grow the company.

In the reported words of their CEO Andrew Ferrier, “This pilot project will allow us to develop and test the right model for our own dairy farming operation. This demand will not be met by milk produced locally.”

Those words will provide little comfort for farmers who see Fonterra as a New Zealand owned farmers co-operative and not an international dairy corporation like Nestle. Strangely enough, Fonterra finds it acceptable to buy farms in Brazil and yet wishes to keep New Zealand farms locally owned. As Fonterra chairman Sir Henry Van Der Heyden has been reported to say, “I want to see as many farms as possible stay in local hands (in NZ).”

If this is so. then setting up dairy farms in Brazil and sharing New Zealand’s technology and capital seems to be a strange way to go about it. New Zealand ownership of farms at home is hard to argue for if you are buying up farms in other countries. Consequently, our Government has allowed an increasing number of New Zealand farms to fall into foreign hands and these have the potential to buy up Fonterra from the inside.

In New Zealand, dairy farmers are also having to change their currently “dirty dairying” behaviour and adopt a “clean streams” approach to give some credibility to our very good environmental reputation. It requires a considerable amount of investment and it could be argued that this should be given a greater priority than expansion overseas.

In Brazil, the Goias district apparently faces similar environmental problems to New Zealand. It will be interesting to see if Fonterra’s trial farms are environmentally friendly or merely shifting “dirty dairying” offshore.
Posted by Dave Wolland at 11:43 PM