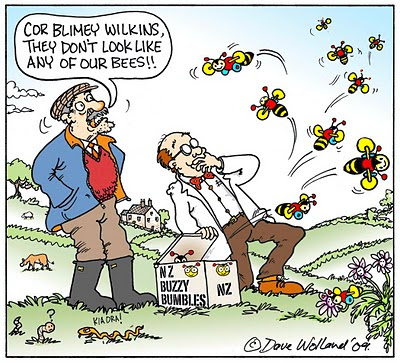 I have often heard tourists from Britain say how much the Kaipara landscape reminds them of home. This is not surprising of course, because most of the pioneer settlers came from there and brought with them the trees and the farming practices they were familiar with.

The traffic has not been all one way it seems. Flatworms, that are native to New Zealand, have somehow hitched a ride to Britain and are now causing havoc there. They are gobbling up millions of plumb British earthworms that farmers depend on to maintain the health of the soil. Apparently, just like the possums in New Zealand, they have no natural enemies to keep their numbers in check.

One British MP was reported to have said that the public should… “Tread on it, or pour something hot or salty on top of it.” This pearl of wisdom was questioned by another politician who asked, “Are you sure it’s effective to stamp on a worm that is already flat?”

Not all species native to our country are unwelcome in the UK I am pleased to say. Many gardeners there are including New Zealand plants to liven up their landscaping and I have seen photos of our cabbage trees “bringing a touch of the subtropics” to coastal areas of Scotland.

Even the humble Manuka has been planted by British apiarists to provide the magical manuka honey that is now so much in demand world wide for its healing properties. It is bound to escape into the wild and who knows, it might enjoy living there as much as gorse does here.

It seems our wildlife is not the only a source of desirable species. We have also been seen as a kind of Noah’s Ark for the Short Haired Bumble Bee that is now extinct in England. Small populations have been found in the South Island and so a hundred or so ‘Buzzy Bumbles’ have returned to their original territory.

Scientists hope to breed them up and release them into the wild to boost the declining populations of bumblebees there. Oddly enough, English farmers have been adopting the “more efficient” agricultural practices we see in New Zealand and this has put a lot of pressure on their wildlife and upsetting the natural balance in the countryside.

Rural England can no longer be generally described as a land of picturesque villages nestled into a landscape of pastures hedgerows and woodlots. Today, highways, urban expansion and ‘prairie farming” (without hedgerows) are putting pressure the ecological balance in the environment.

Sadly, it appears the little shorthaired bumblebee threw in the towel after being there for thousands, or even perhaps millions of years. I can see that there is a warning for us here, on our beautiful South Pacific Island, to take better care of the countryside and the bush.

At a time when we all need as much foreign exchange as possible to pay off our overseas debts, this kind of ‘eco-export’ could be the way to go. I can think of some more surplus introduced inhabitants here, that are on the protected species list in their country of origin – wallabies and possums.

Just imagine how pleased the Aussies will be to see thousands of their beloved marsupials bounding down the gangplanks put down by live shipment boats from New Zealand. They must surely be wondering how to restock their burnt out countryside after the devastating bush fires last summer. So, we ought to be able to corner the market and name the price.

What a “Lucky Country” they are to have us so nearby to help them out in their hour of need and also at the same time help us humanely remove our pests. Obviously, it would be a win/win situation for both countries and it goes to show that nothing is ‘impossumble’ when you use your imagination.
Posted by Dave Wolland at 11:30 PM