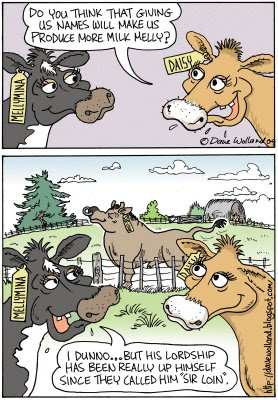 For most of my working life I have had farming neighbours and I have got on well with nearly all of them. My first impressions of how they lived and worked are still the most lasting and come from the time I fled the city to set up a studio in the country. I found a derelict farm house to rent and in order to get a regular supply of water, I had to sort out an arrangement with John, my sharemilking neighbour.

John had a British army background and he wasted no time in telling me what a lousy job it was - sloshing around in the mud and cow shit and putting up with bitterly cold southerly winds. To make the case clearer, he waved a piece of alkathene pipe in the direction of a few stragglers and roared profanities at the dog.

His milking shed looked like a battleground and it was so noisy, I left with my ears ringing. There was effluent all over the place and his young worker was just as agitated as the cows as he tried frantically to milk at the hectic pace that John had set.

My landlord, on the other hand, had quite a different approach. I went over to his place to have a chat once and as it happened, he too was finishing off a day’s milking. It was a balmy summer afternoon and we met by the railing around the yard.

He had the National Programme going at a moderate volume and the last of the cows were going thru’ the shed at a leisurely pace. While we were talking, a cow came up and sniffed around me. I stepped back (not wanting to get goobed on) and to my surprise Frank reached out and scratched her topknot, which she seemed to really like.

Frank explained that he knew this one as a heifer when she was struggling to survive and needed extra TLC. I gave her a scratch as well, keeping an eye on her huge salivary tongue. The farm worker gave me a smile when he saw me nervously approach the cow and I could tell he liked his job by the way he whistled along with a familiar tune on the radio.

I came away with a different view about farming and thought to myself “Now that’s the way to do it.” Because I had seen this way of working, it was not surprising for me to hear this week that naming cows could increase production.

Research results from Newcastle University in the UK indicate that this practice can yield up to 284 litres of milk annually. Keeping track of hundreds of cows this way might seem crazy at present. However, when robots take over in the near future, farmers might use the same automated voice recognition technology that Telecom employs to milk its customers.

“Hello Daisy, please tell me in a few moos how your day has been while I connect you to a machine that can help.”
Posted by Dave Wolland at 5:41 PM