A Matter of Fat 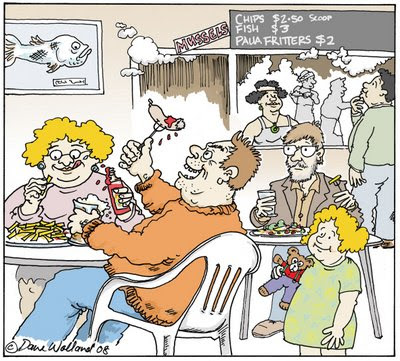 A Matter Of Fat

Food seems to be on my mind lately and I was interested to hear on the news that the Japanese Government is planning to penalize people they classify as being dangerously overweight. In order to stem the rise in heart attacks, they are going to employ obesity wardens to spot check people on the street and issue fines for those exceeding the officially healthy height to weight ratios.

I wonder if the idea will catch on here? If it does, then I know of one small town, I visited recently, where the residents had better head for the hills.

Kaiaua is situated on the coastal route out of Auckland on the way to Thames and it proudly boasts to be the best place to buy fish and chips in New Zealand. Now, I cannot claim to be a skilled judge in deciding which greasies are best, but on the day I visited the Kaiaua Fish and Chip Shop, it was overflowing with enthusiastic customers.

While I stood in the queue, I had time to take a look around the place. I soon found myself becoming very self-conscious about my appearance, because I noticed that I was the only letter “I” in a paragraph of “O”s. At almost every table, were some of the fattest people I have ever seen. The shop was packed with families and couples ploughing thru’ mountains of chips, hamburgers and battered fish. Even the kids were bursting at the seams and looked like mini versions of their corpulent parents.

To avoid staring at them too much I gazed out of the front window at the view. By the beach, I could see some contractors standing around their vehicles having a smoko and all of them were portly to say the least. The sign attached to one of their trucks appropriately read… “Oversize”.

After my meal, I went next door to the Bay View Hotel for a game of snooker and a beer – sure enough, the majority of the crowd were just the same. There were, thankfully, a few more of my build (which is on the slim side) to make me seem less obvious. Everyone appeared to be enjoying themselves as they swayed and danced with the music and I began to wonder why I was so concerned about a diet that experts say is such a health hazard.

I have often heard Auckland described as the “Polynesian Capital of the World” and I think many other Kiwis might be picking up some of the lifestyle too. In a traditional Polynesian society being XXOS was very acceptable because it indicated you had risen high enough to be able to avoid physical labour.

Today, we have machines to do much of the hard work and so, in a way, we can now all be aristocrats. If people use their physique to celebrate this, then unfortunately, I am going to be always in amongst the disadvantaged – no matter how much I eat, I will never get near the ‘Pacific Norm’ in body shape.

Somehow I will have to accept gracefully my newly undersized position of being at the bottom of the ‘peckish order’ or get a stomach enlarging operation of some sort so I can look like Gerry Brownlie or the Hon. Parekura Horomia.

Then again, as this is an election year, it might more prudent to hold off until we see who wins. If the economic situation worsens internationally, lean and mean could well be fashionable again.

I can imagine people like parking wardens would jump at the chance to take part in the battle of the bulge. I can see them leaping out, Japanese style from behind cars and dishing out instant fines for being over the limit. Come to think of it, I have got the build for a job like that, but I think it would be too stressful punching tickets above my weight.
Posted by Dave Wolland at 12:57 AM